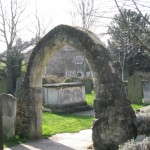 The present churchyard and church were given to the parish by King Henry VIII in 1543. The churchyard was originally much smaller, surrounding the Tudor church, of which only the Tower remains.

The churchyard was extended to the south in 1742 and 1799 with gifts of land and was the sole burial place for parishioners for over three centuries. It was closed in 1854 when a new cemetery was opened in South Worple Way. A further addition was made in 1950 when some ancient houses along the High Street were demolished.

The earliest surviving tomb is that of John Partridge, the astrologer (d.1715). Other famous people include a Prime Minister, Lord Sidmouth (d.1844), and three Lord Mayors. There are vaults for well-known local families such as the Temples, Gilpins and Penrhyns. Other tombs recall craftsmen and tradesmen, such as the potters Sanders and Kishere, the market gardener Grayson and the Woodliss family of masons, who made many of the headstones. The Information Board near the old arch will help you with further details and show you where to find some of these features.

In the 1980’s the churchyard was derelict but funds were raised locally towards its restoration. The project was carried out to a sensitive design prepared by Allan Hart and completed in 1989. The Friends of Mortlake Churchyard was then launched as an association with the objective of maintaining the historic churchyard.

The Friends ensure that the churchyard is attractive to look at, is sympathetic to wildlife and is maintained as a resource for the whole community, helping people make connections with others in various ways. An annual programme of events is organised, including a summer garden party, and members receive regular newsletters. Our success was recognised by reaching the finals in the Best Kept Churchyard Competition 2001. 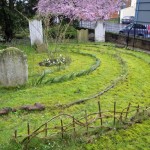 The labyrinth on the north side of the church was first laid out in 2003. It is based on a simple design of four circuits, as originally found at Temple Cowley, near Oxford, though no longer visible there. Originally used only at Easter, it is now laid out with natural materials, so that it may be enjoyed all through the year.